Hades - How playing the roguelike game helped me with my patience

3 months! That's how long it took me to finish*the game. It also took me as long to write this review. Seemed only fair to play through the main game before I give my opinion on it. 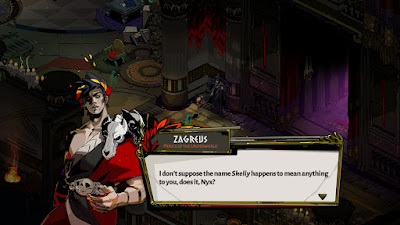 I will say that when I completed the main game, I have never felt more accomplished in my entire life. It is perhaps the only rouge RPG that I am able to complete in recent years. I wasn't even able to finish Zelda's Ocarina of Time for Nintendo DS, and I've played that before! Come to think of it, I also did not finish Pokemon Sun/Moon or the recent Pokemon Sword/Shield. The fact that I was able to complete Hades speaks volumes.

Hades is a roguelike dungeon crawler video game that is repetitive and can be frustrating and demoralizing to most players. With roguelike games, one of the key features is that you make more progress by taking advantage of your knowledge from past failed attempts. This is core to the narrative of Hades.
In traditional roguelikes, the player is accruing knowledge about how the world functions. This additional knowledge leads to their progress, rather than, say, having more health. So while "every run counts" in any roguelike, that progress doesn't physically manifest itself.
The player takes the role of Zagreus, the prince of the Underworld, who is trying to escape the realm to get away from his dispassionate father, Hades, and reach Mount Olympus. His quest is supported by the other Olympians, who grant him gifts to help fight the beings that protect the exit from the Underworld. He is also helped on his quest by notorious residents of the Underworld, such as Sisyphus, Eurydice, or Patroclus. The game features four "biomes", or locales of the underworld: Tartarus, Asphodel, Elysium, and the Temple of Styx 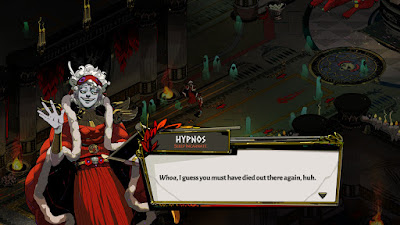 After a botched Hades run, characters might offer congratulations for making it further, or give you shit for dying to an easy enemy. There will usually be new conversation trees that provide backstory and insight into character relationships, and you can offer gifts to different characters that open up new subplots. Or, if you choose, you can ignore all of this! The story is optional, but for many, seems to dull the frustration of death. In death, there is "progress." 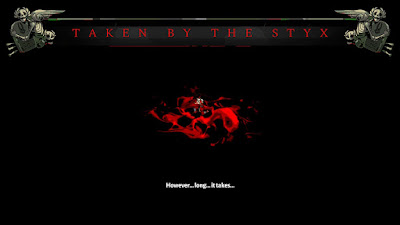 When the player sent back to the beginning, the story advances and provides an opportunity to invest in upgrades that will make your life easier on the next run.

I love this game. It definitely helped me deal with the quarantine and this whole pandemic. While it frustrating at times, it was rewarding whenever I'm able to go further in the game. It tested my patience, but it reminded me of the old adage, "you can make mistakes as long as you don't repeat them and learn from them," or something like that.
Labels: gaming hades Supergiant