The Animal Crossing x Sanrio amiibo cards came out today.  I've been looking forward to this day since Nintendo announced it earlier this year. About a week ago, the game received the update needed to support the amiibo cards.

The Animal Crossing Sanrio amiibo cards were originally released in 2016 for Animal Crossing: New Leaf. For ACNH, they will unlock a range of related items for each character / Sanrio property, and give the option to add that villager to your island.

Here in the US, the cards were exclusively at Target - with must be purchased on their website and without pre-orders. A total shitshow, if you ask me.

I was devastated. I was upset. I cursed the scalpers who cheated the system and are now selling the cards for as much as $40 on eBay.  I tweeted my frustrations and I wasn't the only one who felt wronged by Nintendo, by Target, by the scalpers, and by capitalism.

Then, just before noon today, I got a text from my boyfriend. He said that he was stopping by my office to give me something. And he showed up: 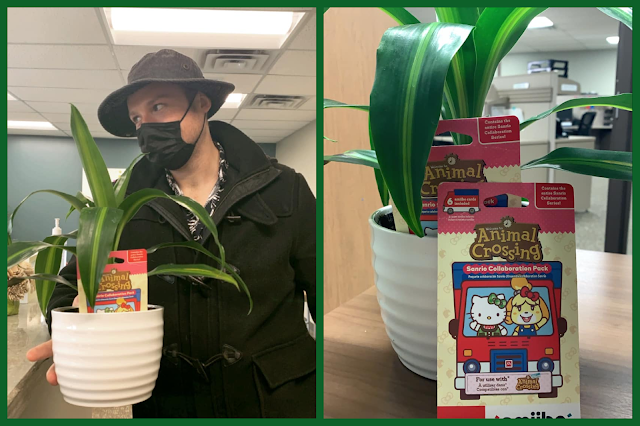 He got me 2 packs of the cards (I only needed one) and a plant for my office. Isn't he the best?