Are You Excited for Super Nintendo World Theme Park? 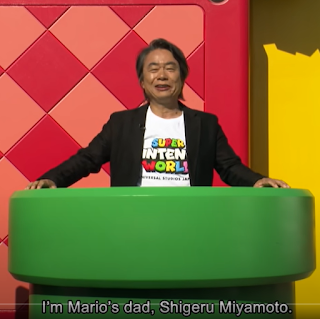 On Friday (December 18, 2020), Nintendo's Shigeru Miyamoto (aka "Mario's Dad") gave fans a preview of Super Nintendo World at Universal Studios Japan on their YouTube livestream.
Nintendo's Universal Studios Japan will hold its grand opening of the world’s first Super Nintendo World on February 4th, 2021 – bringing to life a highly themed and immersive land featuring Nintendo’s legendary worlds, characters, and adventures where we will be able to play inside our favorite Nintendo games.
The 15-minute video, embedded at the end of this post, revolved largely around the park's introductory moments, which are full of Super Mario melodies and interactive elements. Many of the park's decorations and objects can be interacted with by park visitors who wear a special wristband, dubbed the Power-Up Band, which includes an Amiibo-like NFC chip. Press its sensor near park objects like a Super Mario coin block, and a new virtual item will appear in a synced Super Nintendo World app on your smartphone.
Exactly how these virtual items will affect your visit to Super Nintendo World remains unclear, but Miyamoto-san hinted at surprising attractions and hidden interactable panels for park visitors to discover in person. (Additionally, those Power-Up Bands will double as Amiibo for compatible hardware, like Nintendo Switch.)
Only one "ride" received a showcase in the video, albeit a brief one: a Mario Kart race against Bowser. It's hosted inside a replica of Bowser's castle, and visitors will sit in one of a series of Mario-styled go-karts that appear to be linked on a rollercoaster-like track, as opposed to freely controllable. Exactly what visitors will see on that ride remains unclear, but previous news about the ride's augmented reality (AR) elements was reinforced with the first official look at the park's AR glasses, which come attached to a Super Mario hat.
Mr. Miyamoto also confirmed that Super Nintendo World is coming to Universal theme parks in Orlando and Hollywood.
Labels: gaming japan nintendo super mario world theme park